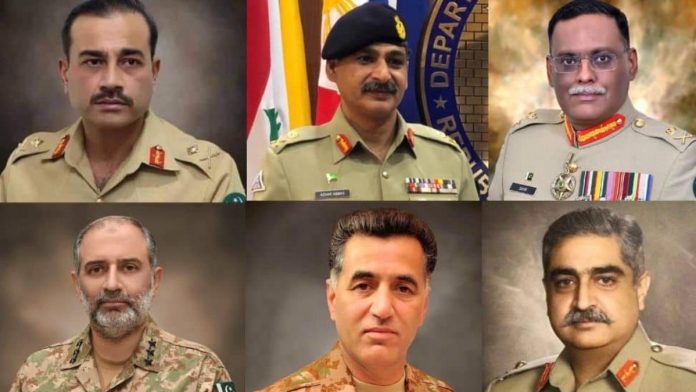 Chief of the Army Staff (COAS), General Qamar Javed Bajwa is scheduled to finish his term during the final week of November 2022.

General Bajwa was first appointed COAS in November of 2016 for a 3-year term. His term was extended to another three years in the month of August 2019, beginning in November 2019 and running until 2022.

Media reports claim that the Prime Minister (PM) Shehbaz Sharif could begin the process of naming the new Army Chief before the end of the month, and a final decision could be announced before the middle of next month.

The norm is that General Headquarters (GHQ) sends a list of four to five Lieutenant-Generals with the highest rank for the Ministry of Defense. The Ministry forwards the list to the PM Office, and the PM Office selects the best candidate for the position of COAS.

The official notice for the selection COAS COAS is released by the President pursuant to Article 343 (3) in which it is stated that:

The President will take the guidance from the Premier Minister nominatethe following:

and also determine their pay and allowances.

Furthermore, Schedule V-A in the Rules of Business, which outlines the cases that must be submitted before the Prime Minister for his approval specifies that:

The date for the start of the selection process for the new Army Chief is getting closer Let’s take an overview of the six Lieutenant-Generals with the highest rank who are candidates to be COAS. COAS.

Lieutenant. Gen. Asim Munir is currently employed as the QMG at GHQ. The army he joined during the 17th OTS course, Mangla, and was promoted to the 23rd Battalion of Frontier Force Regiment.

He was elevated to the rank of Lieutenant-General in September 2018, and was appointed Director General (DG) of the Inter-Services Intelligence (ISI) next month.

Lieutenant. Gen. Sahir Shamshad Mirza is currently the Commander X Corps in Rawalpindi. He was appointed to the 8 8th Battalion of the Sindh Regiment.

He was previously his chief of general Staff as well as Adjutant General GHQ Vice Chief of General Staff, DG Military Operations (MO) and GOC General Officer (GOC) for the 40 the division of the Infantry in Okara.

Lieutenant. Gen. Azhar Abbas is currently employed in the position of Chief of General Staff which is the most sought-after position of the Pakistan Army after the Chief of the Army Staff.

The Chief of the General Staff Lieutenant. Gen. Azhar Abbas is responsible for the operational and intelligence aspects within the GHQ in Rawalpindi.

Also Read: Army Chief requests US to assist in speeding up Pak-IMF deal

He was commissioned into his 41 st Battalion of the Baloch Regiment. He was previously the Commander of the X Corps in Rawalpindi, DG Joint Staff at Joint Staff Headquarters Chaklala as well as Commandant School of Infantry and Tactics in Quetta, GOC 12 Infantry Division in Murree and Private Secretary to the former COAS general Raheel Sharif.

Lieutenant. Gen. Nauman Mehmood is currently in charge of the presidency of the National Defense University (NDU) in Islamabad. He was commissioned into the Baloch Regiment.

The general previously served as the Commanding Officer of the XI Corps in Peshawar, GCO of the Infantry Regiment in North Waziristan, DG Inter-Services Public Relations (ISPR) Analysis Wing, and IG Communication and Information Technology at GHQ Rawalpindi.

He was previously the Commanding Officer of the XI Corps in Peshawar, GHQ Adjutant General as well as the Director of Operations from the 16 Infantry Division in Pano Akil as well as DG Counter Intelligence GHQ.

The general was previously employed as Adjutant General GHQ as well as Commander of the 10 Infantry Division in Lahore, DG Staff Duties at COAS Secretariat and Military Secretary to the former President Asif Zardari.

Extension to the General Bajwa

While the General Bajwa was granted an extension of three years in August of this year However, the Supreme Court of Pakistan (SCP) was able to suspend the extension in November of this year.

The Supreme Court extended the term of General Bajwa for six months and requested the parliament to approve laws on the appointment of the services chiefs.

In January of 2020 the legislature approved legislation that placed the issue of extending to the terms of the services chiefs to the discretion of the Prime Minister. This meant that General Bajwa was granted an extension of three years.

It is important to note that the law contains an explicit clause that establishes 64 as the minimum age to retire an officer in charge.