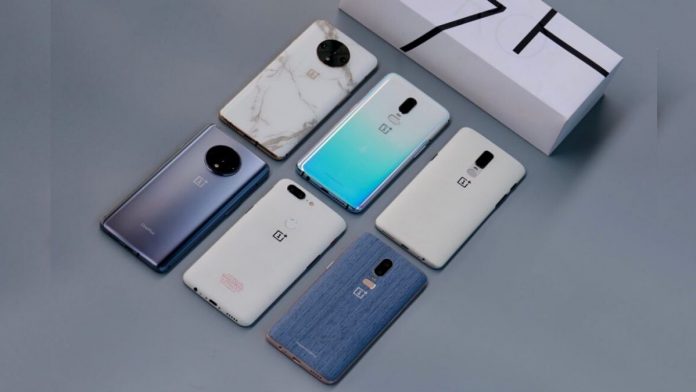 Just a little while ago, the CEO of Chinese manufacturer OnePlus in Pete Lau went on to post on Twitter a few images of OnePlus devices. While this wouldn’t normally be news, some of the OnePlus colors and textures actually represented unreleased variants that the company never actually launched – and so we’ve never seen such colors and textures practically in the market.

The posted pictures represent six different colors ways for a few different phones from the Chinese brand – some of which have ended up being released and some not. From the post, it seemed as there were two OnePlus 7T devices, three OnePlus 6 devices and one OnePlus 5T device. In the post,  the white one found in the top right hand corner looks a tad different to what the usual OnePlus 6, it might be an unreleased prototype.

Must Read : OnePlus 7T and 7T Plus Launch Dates have been Leaked

The most obvious standout amongst all present is indeed the marble OnePlus 7T – which looks stunning to say the very least. It does indeed look like the OnePlus 7T with a skin sticker on it, however, our guess is that the marbled tones as well as the colors were perhaps designed within the glass backing rather than just being covered up. The CEO doesn’t actually confirm the whole ordeal here so we’re not at all sure.

Also, the teal gradient on the OnePlus 6 also looks quite stunning. The “denim” OnePlus 6 might not be for all – however, just about represents yet another option for all of us who have a thing for denim.

Pete Lau also further stated that the company will have “more to share soon” when it comes to passed-over OnePlus colors and textures and so one would be wise to keep an eye on his Twitter account if you are indeed on the lookout on what to expect from OnePlus in the future!

Meta set to shut down its private messaging app for couples