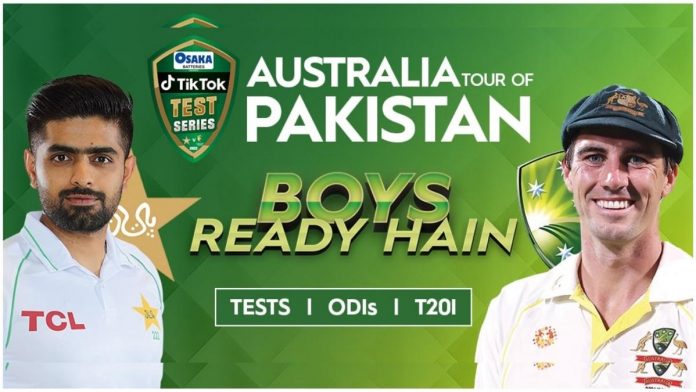 Australia cricket team, led by Pat Cummins, is scheduled to play a multi-format series in Pakistan. The PAK vs AUS clash will begin on March 4, with the Test Series followed by an ODI series and conclude with a one-off T20I encounter on April 5, 2022. Not to mention that the Australian team is going to play cricket in Pakistan after 24 years! The team will be in a bio-secure bubble that will envelop them throughout their six-week stay.

This news came as a treat for cricket fans to be receiving right after the HBL PSL 7, because the Australian team last played in Pakistan in 1998, winning a three-test series 1-0 and blanking the hosts in the three ODIs.

The ODI series will witness three encounters on March 29th, March 31st and April 2nd. Whilst the T20I is scheduled to be played on April 5th at Rawalpindi cricket stadium.

Pakistan Cricket Board has confirmed the opening of tickets booking. Customers can now purchase tickets from PCB.BOOKME.PK as well as from their nearest M&P Courier outlets. All ticket-holders will also have to display their immunization certificates and CNIC at the time of entering the venues.

Only two categories are available for Rawalpindi Test matches. The PKR 500 VIP enclosures comprise Imran Khan, Javed Akhtar, Javed Miandad, and Azhar Mahmood, whereas Premium enclosures include Shoaib Akhtar, Sohail Tanvir, Miran Bakhsh, and Yasir Arafat, and the price per ticket has been fixed at PKR 100.

There will be four enclosure categories in Karachi and Lahore, the ticket prices for PAK vs AUS are as follows:

So, gear up cricket lovers. Head to PCB.BOOKME.PK to book your tickets now to support your favorite teams. See you at the stadiums.

Reaction of Pakistanis to The PSL 6 Anthem

Websites That Let You Follow the Football Score Live