Top ten donors. Once again the entire nation is working for one goal; to donate more and more and achieve the target of Daimer Bhasha and Mohmand Dams Fund. In this regard, Pakistan Army, as an organization is the highest contributor of donations so far. Till now, Rs. 582 million have been contributed by Army according to State Bank of Pakistan (SBP).

On the other hand, the second highest contribution was made by the Strategic Planning Directorate. They donated Rs. 201 million to dams’ fund by end of September 13, 2018.

It is important to know that the top five contributors donated over Rs. 1 billion for the dams’ fund. And this amount is nearly one-third of the whole donation received through banking channels at end of September 13. T

Must Read: Shoppingum.com-The Best Online Experience in Pakistan to Save Money, Time & Effort

Here is the list of top 10 donor organizations which contributed an amount of Rs.1.156 billion in the period under review. 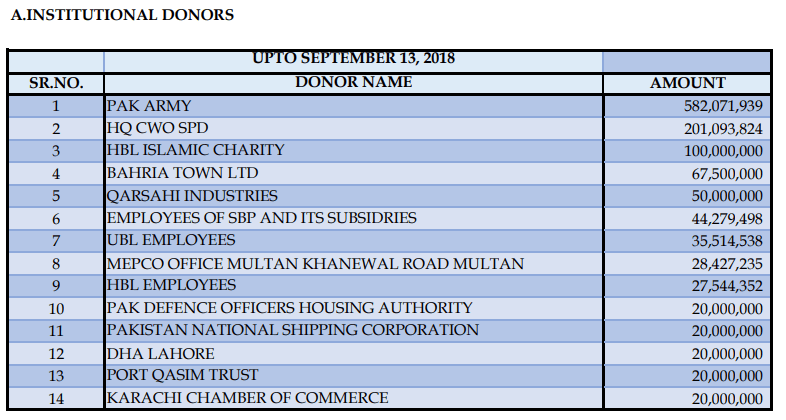 Now let’s talk about the great individuals who have contributed much in the dam fundraising campaign. Well, so far Pervaiz Bhatti is one of the most generous contributors as he has donated an amount of Rs. 50 million.

President of the Centaurus Group, Sardar Tanveer Ilyas Khan is on the second number as he has donated an amount of Rs. 20 million.

On the other hand, Abdul Hanan Khan, Zeeshan Ahmed and Saqib Razzaq have donated an amount of Rs. 19 million, Rs. 15 million and Rs. 10 million respectively. These were the top 5 individuals which have contributed an overall amount of Rs. 114.88 million.

Not to know, the overall donation made by top ten contributors is Rs. 143.65 million by the end of September 13.

All this information about “Top 10 Donors to PM & CJP Fund for Water Reservoir” have been issued in the recent statistical report updated by SBP.

It is important to mention here that the State Bank of Pakistan has renamed the dam fund’s account a week ago with “Prime Minister and Chief Justice of Pakistan Fund for Diamer Bhasha and Mohmand Dam”.

The donations received by the central bank collected in 40 days recorded at Rs. 1.99 billion but the values of donations tremendously increased to Rs. 3.27 billion in the past five days till September 13. Now the total figure in the dam fund is Rs. 1.28 billion (64%),according to SBP data.

Till now, the donations sent by overseas Pakistanis are Rs. 181 million, this is a 5.5% share of overall dam fund.

On the other hand, the donations received by the resident of Pakistanis are Rs. 3.092 billion which is the 95.5 % of the overall donation.

Have you put your part in dam funds? If not, then what you’re waiting for? Contribute as much as you can, as every penny matters! Even you can send an SMS by typing “dam” to 8000 at the amount of Rs 10/.

97 % accurate detection of abnormal heart rhythm is possible by...