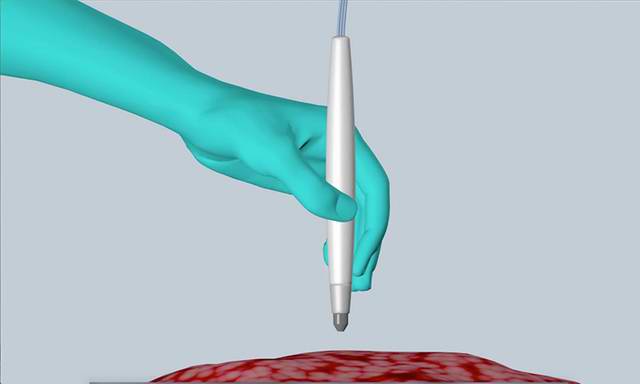 96% accurate tumour detection only in 10 seconds with MasSpec Pen

“If you talk to cancer patients after surgery, one of the first things many will say is ‘I hope the surgeon got all the cancer out,’ ” said Livia Schiavinato Eberlin, an assistant professor of chemistry.

Claiming it to be heart-breaking for the patient to know that it is not removed fully, she says that MasSpec Pen can make it possible. As this pen could help surgeons find and remove every last trace of cancer during surgery.

This pen can detect cancer cells 96% accurately, only within 10 seconds and helps surgeons remove tumours more accurately just as taking tissue sample to get tested from a pathologist.

This technology from a team at the University of Texas at Austin, uses water droplet to analyse cancer cells without requiring cutting of tissue. Less invasive surgery is also hoped with this technology. This pen detects every piece of tumour and leaves healthy tissues behind.

Mass spectrometer is programmed in this pen to detect compounds that make lung, thyroid, ovary and breast tumours.

It makes it easy for the surgeons to decide what tissue should be removed and what to leave behind. More precise, quicker and safer surgeries are possible with this pen according to James Suliburk, head of endocrine surgery at Baylor College of Medicine, and member of the team.

The team has examined the accuracy of the pen on more than 250 samples of human tumours and also tried it out in live mice growing human breast tumours.

Automated and controlled delivery of a discrete water droplet is enabled to a tissue surface by this pen for efficient extraction of biomolecules.

With this pen highly skilled and time consuming job of a pathologist looking at a frozen sample of tissue under microscope is not required.

Breast cancer is the most delicate case for the doctors as they face a challenge in determining the delicate boundary between cancerous and normal tissues. Team’s idea is to make it possible for the doctors to use the pen during surgery. In this way doctors can test the remaining tissue after a tumour is removed and could examine the health of tissue.

The process takes only a few seconds to sample a tumour as a water droplet is used that is sucked through a tube to the MasSpec itself.

But to get a validated new device, it will take a long time and a range of tests. Only a few hundred tests are not enough to assure the accuracy of the device.

Windows 10 available in 190 countries as a free upgrade