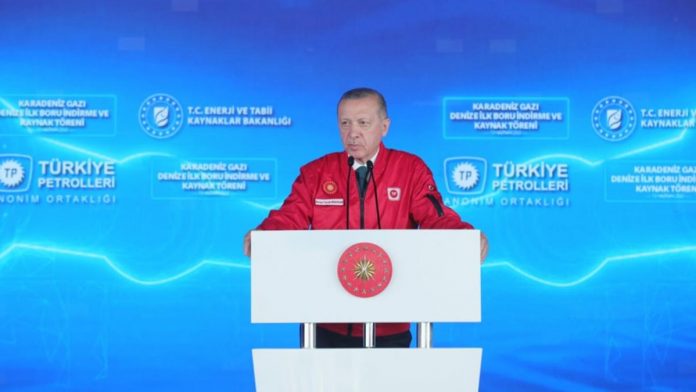 Erdogan said Monday that Sakarya Gas Field’s production will “hopefully hit its peak in 2026,” at an event to mark the laying the first offshore pipeline carrying Black Sea natural gas.

The Turkish president also applauded the decision to rely solely on domestic resources.

First gas transmission will be via a subsea pipe that Turkiye will build to run 150 kilometres (93 miles) from the field to the onshore, where it will connect to the national gas grid.

Erdogan stated that Turkiye views energy as “the key for regional cooperation” and not an area of tension or conflict.

He said, “We will continue to fight in a multifaceted manner until Turkiye has completely solved its problem of energy supply security.”

Fourth drilling vessel on its way

Erdogan also announced that Turkiye’s fourth drilling vessel was named Abdulhamid Han by one of the Ottoman Empire sultans.

He added, “It is also crucial that we make such an historical discovery using only domestic resources.”

Trump to Leave Office With An All-out Attack On Huawei