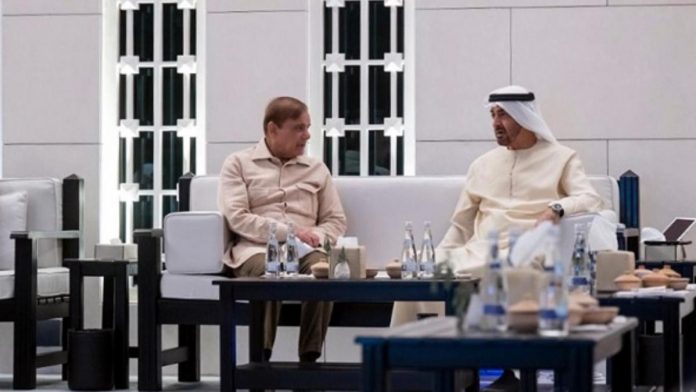 A group of experts in economics who hail from the United Arab Emirates (UAE) will be arriving in Pakistan to conduct the purpose of an “emergency trip” to carry out decisions made by the leaders of both nations according to the Prime Minister’s Office (PMO) declared on Monday.

The announcement comes just a day after the Prime of the Cabinet Shehbaz Sharif’s visit in the UAE following his inauguration following a trip of three days in Saudi Arabia.

During his visit the PM Shehbaz was to meet sheikh Mohamed bin Zayed Al Nahyan the The Crown Prince of Abu Dhabi and Deputy Supreme Commander of the UAE Armed Forces. They discussed the need to strengthen the long-standing relationship between the two countries and the possibility of accelerating cooperation on various areas.

The two sides discussed various international and regional concerns that are of common concern According to Emirates News Agency.

The event was held in the Qasr Al Shati Palace where the Abu Dhabi crown prince wished the PM Shehbaz success in managing Pakistan to further growth and prosperity in the coming time.

In a series tweets this morning in a series of tweets, the PMO announced that a group of experts in economics was touring the country to make sure that the government is implementing of the decisions made at the meeting earlier in the day.

The delegation will also meet with PM Shehbaz the 3rd of May (tomorrow) at Lahore in which the two sides will have a meeting on suggestions to enhance the economic exchange in the region between Pakistan with the UAE.

Discussions will be held to encourage investment, trade and economic actions between the two countries and the delegation visiting Pakistan will be informed about the investment environment and the opportunities available in Pakistan The PMO stated.

Additionally, discussions will be held for cooperation in the power industry, petroleum and industrial.

In the year 2000, Pakistan and the UAE commemorated 50 years of diplomatic relations.

The Gulf country has also made the decision to transfer the $2 billion loan to Pakistan in the month of April 2021 in conjunction with UAE foreign minister vowing to “extend any support that is possible”.

The following year in the year, Vice President and Premier Minister of the United Arab Emirates Sheikh Mohammed bin Rashid Al Maktoum had repeated the desire to consolidate the bilateral relations that span multiple facets in a conversation together with the President, Arif Alvi.