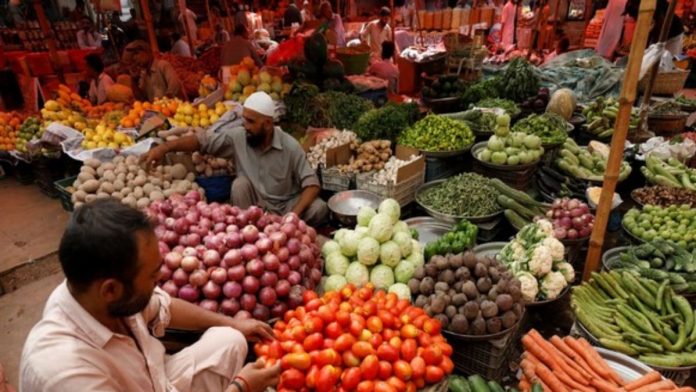 The week’s inflation as of on the 22nd of September dipped 8.1 percent compared to prior week’s levels, mostly due to an increase in the cost of food items such as bananas, tomatoes, as well as cooking oils, the official data revealed on Friday.

However it is true that it is worth noting that the Sensitive Price Index (SPI) is a measure of inflation for the short-term however, was more than 29pc more than the week in the previous year as reported by the Pakistan Bureau of Statistics, mostly due to the price of energy and food hitting records in the country.

It was nevertheless an important respite from the last few weeks that witnessed year-on year inflation reach dizzying levels that were not seen for decades.

The year-on-year variation in the weekly inflation rate was in the range of 16.5pc in the week which ended on April 14, only four days after the former premier Imran Khan was sacked from the throne.

The latest figures show that the SPI decreased little on a weekly basis, mostly due to significant drops in prices of onions and tomatoes in the last week, when Pakistan began to import tomatoes and onions through Afghanistan as well as Iran. The week ended the 28th of July saw a dramatic increase in inflation week-to-week in the form of prices increasing by 3.7pc.

The soaring prices of vegetables because of damage to standing crops in aftermath of the flooding as well as an enormous increase in electricity costs have led to rising prices. The destruction on standing plants is expected to increase the cost of vegetables over the next weeks.

The government has set an inflationary goal for the year that is 11.5pc for the current fiscal year. However it is the Federal Board of Revenue, that uses inflation to determine its methods to collect taxes on consumers, predicts inflation to be 12.8pc. In the estimation of independent economists, inflation will be around 25pc- 30pc.

The International Monetary Fund said in its staff report for the country it was expected that average Consumer Price Index (CPI) inflation was likely to increase up to 20 percent during the current fiscal year and core inflation will remain elevated due to the rise in prices for energy and a decline in the value of the rupee.

The SPI is a price-watching tool that monitors 51 essential items , based on a survey of fifty markets across 17 towns across the nation. In the week that was under review, prices of 26 items increased, 10, dropped, and 15 remained constant.

For a change in weekly fluctuations in food prices, price of tomatoes decreased 8.15pc and bananas 1.9pc and garlic 1.31pc and masoor pulse 0.99pc and a five-litre container with cooking oil 0.78pc onions 0.46pc as well as an 2.5kg packet of vegetable Ghee 0.34pc and 1kg vegetable Ghee 0.06pc.

For non-food items, electricity prices for the initial quarter fell by 64.23pc and for LPG at 3.82pc.