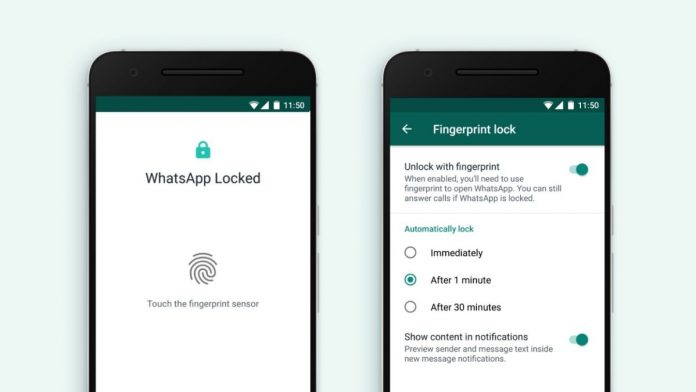 WhatsApp is by far the best top ranked messaging app currently used around the globe with new features coming in every now and then. In addition, one of the most attractive thing about the app is its easy to use interface and the apps security patches which are released in almost every new update. The company regards security as the top priority and keeping that in mind they provide features which help you secure your account further.

These features eventually, also make it to the desktop version of the app as well and according to the latest reports, we have found that WhatsApp are currently in the works of introducing the fingerprint Verification feature on WhatsApp Web as well, making it much more secure to access your WhatsApp on your computer and PC. As per in accordance with the latest report from the well known web personality, WABetaInfo, WhatsApp is in the works of bringing a new security update to WhatsApp Web which will introduce fingerprint Verification to users. As part of the update, users will now be able to scan their fingerprints using their Smartphones in order to successfully access WhatsApp Web and use it.

Must Read : Honor Gets into The Gaming Laptop Industry: Introduces Wild Options

The current requirement on WhatsApp Web is that you have to scan a QR code from the phone, but it lacks any form of security, meaning that anyone who has access to your phone can log in to your WhatsApp web from any other device. Seeing that, WhatsApp is adamant on changing that around and are going to introduce the fingerprint unlocking feature on the Webpage in order to provide users with much more security.  At the moment,  finer details regarding the new report is still not available and information on as to how this security feature will work or when it will be added to the live version of WhatsApp is yet to be announced by the company. The report only says that the feature is currently in the development phase and shall be made available in a future update which could take a few months before it reaches you.

Playstation communities feature to be shut down

Tiktok Faces Heat for Recommending a Suicide Video to Users