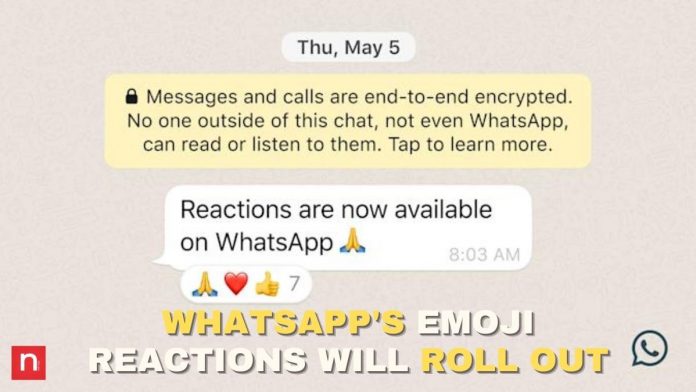 After announcing the feature in the last month the company that owns the messaging app Meta WhatsApp has finally launched the ability to let its users respond to messages by using an emoji as well being able to share files of more than 2GB in size. This is an impressive increase over the prior 100MB minimum.The Facebook’s owner Mark Zuckerberg posted on His wall The emoji reaction is finally accessible on the messaging application. The company also announced that they are planning to double the maximum amount of group chats beginning today.

“We’re happy to announce that emoji reactions are accessible on the most current version of the application. Reactions are entertaining, fast and help reduce over-load within groups, too. We’ll be improving them over time by adding a wider variety of expressions in the near future,” the platform wrote on their blog.

WhatsApp has released an initial Version of their feature in December it was restricted to a select few users however the feedback they received was mostly positive. They’ve made it available to everyone.

This feature is very similar to Facebook’s Messenger feature that lets users respond to messages by using six different Emojis.

But, Meta made it clear prior to the announcement that the Emoji-related reactions will be limited in comparison to Messenger which has many skin tones and emojis.

The company stated that they’ll be developing other emojis as well as reactions.

The reactions include the red heart, smiles, thumbs up sad faces, surprise face and an “thanks” emoticon.

Apps such as Slack as well as Telegram have utilized this feature for some time due to the fact that they are they are interactive and how useful the reactions are. If users want to respond to a message, without clogging the chat, emoticons can be used for the user.

This feature is also comparable the Instagram’s Direct Messages. If users wish to take advantage of these kinds of reactions, they should first make sure the app WhatsApp is current.

More important, WhatsApp is also expanding its maximum size for chats in groups. It was previously at 256, but it’s doubled to at least 512. As per the application it is among the most popular requests has been received since.

“Building secure, private and secure communities is a long-term effort and we believe that this series of enhancements will assist people and groups remain close to each other,” the company said.

But, it is to be noted that based on Facebook’s post on its blog, the feature is “slowly being released” within the application.

In addition users will be able to share files through WhatsApp that can be as large as 2GB at one time, while being secured by encryption that is end-to-end.

The huge increase in the previously set limit of 100MB is beneficial for small businesses, companies and school groups that operate online using WhatsApp. However, it is strongly advised that whenever large files are uploaded the device should be connected to WiFi to allow better uploading or download the files.

“We hope you are enjoying these updates and we look for more updates throughout the year,”” WhatsApp said.