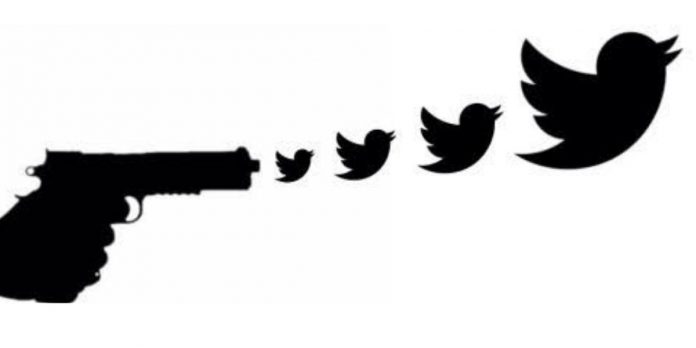 This is how the world ends: not with a bang, not with a whimper, but with a tweet.

“Never, ever threaten……… again or you will suffer the consequences the likes of which few throughout history have suffered before. We are no longer a country that will stand for your demented words of violence and death. Be cautious!”

Sound familiar. At first, the words echoed a movie I last saw but this comes from a man that has the power to start a nuclear holocaust.

Social media can catalyze and amplify hostile relationships among nations, mobs, gangs, and youth. Insults, as well as messages of violence and retaliation, become the spark that ignites a simmering undercurrent of potential violence between factions.

Neighborhood conflicts are no longer limited to face-to-face tough talk on the street. Violence has expanded to a new and complex form of “beef” known as Internet Banging. Let us examine this term in simple words, Internet banging is when gang members don’t just carry guns rather they carry with them twitter accounts. Media outlets in America have reported on a new phenomenon of gang affiliates using social media sites such as Twitter, Facebook, and YouTube to trade insults or make violence threats that lead to homicide or victimization.

Must Read : Deadman walking…a blasphemer’s journey to his death

Although in Pakistan the gangs are still not as tech-savvy than the stars, who certainly know when and where to hit.

Social media works more efficiently than delivering insults in person because of its broad, real-time communication capabilities. One individual can reach hundreds or thousands of others in a matter of seconds no matter their location. Social media utilization for insults or threats is not restricted to keywords but often include mentions of offline events, people, local institutions, and situations that may inform how and why a post is perceived as threatening. In this sense, one social media spark can escalate communication between rival factions who compete for reputation, territory, markets, and the upper hand in violent encounters or publicity stunts.

Although all interpretations of Twitter posts fall into one or more of the forms of communication, most people have their own interpretation and explanation of why and how they would respond to a certain tweet. For example, while one person would choose to ignore a diss or call out on Twitter, another may feel obligated to retaliate. Because of the complexity and diverseness in participants’ interpretations, it becomes a snowball effect.

One can only hope that the variation in interpretation reinforces the need to consider the lens through which readers are interpreting tweets and other social media posts.

ASIM AZHAR COMES OUT AS A VICTIM OF INDO-PAK TENSIONS

Shaan e Pakistan is all set to commence from 1st May...