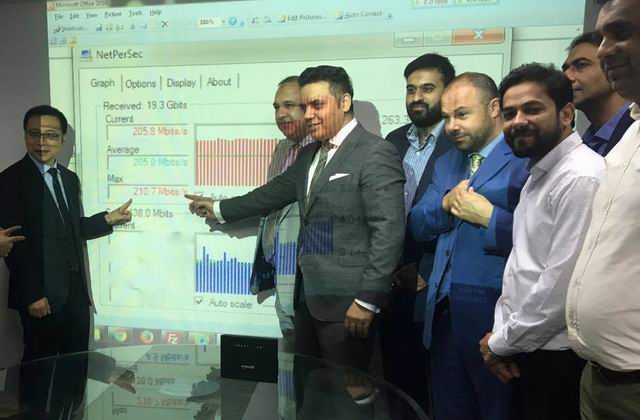 This week Wi-tribe, Pakistan’s leading Home & Business Broadband Internet provider confirmed that it had breached the magical 200Mbps internet speed record following testing on its soon to be released LTE-Advanced (LTE-A) technology network. Wi-tribe’s network will be the first service in Pakistan to deliver 4.5G speeds and quality.

The huge technology upgrade is part of a $100m million three year investment programme into the company designed to focus on speed challenges faced by customers across Pakistan. The investment effectively future-proofs Wi-tribe’s technology and will be followed by a number of value added services. It will mean Pakistan becomes the first country in South Asia and the Middle East to deploy LTE-A technology delivering 4.5G speeds and that for example, end users will be able to watch ultra HD without buffering and businesses won’t suffer due to poor speed related challenges.

Insiders also confirm that Wi-tribe, who have partnered with top Chinese telecoms giant Huawei, will complete the full roll-out of its 4.5G LTE-A network by the end of this month and is awaiting approval from the Pakistan Telecom Authority for its commercial launch.

The President and Chairman of Wi-tribe, Shahid Malik, who previously served as a UK Government Minister and Member of Parliament expressed the company’s excitement at the record breaking results:

“We are truly thrilled at breaking the 200Mbps speed barrier and delivering Pakistan’s fastest ever Home Broadband Internet Service. This a great milestone for Pakistan and all involved should feel proud as we roll-out the first LTE Advanced network delivering 4.5G speeds, not only in Pakistan, but the first such deployment in South Asia and the Middle East on the 3.5Ghz frequency.

“While we don’t intend to offer 200Mbps speeds to our customers, we will nonetheless be offering some very high-speeds & high-volume packages, which cater for all customer needs, and of course ensure all benefit from the superb quality of the revolutionary LTE-A technology.”

Mr Malik was also enthusiastic about the future adding:

“Customers want speed, reliability and quality service – with this investment we can deliver all three and maintain our position as the number one Home Broadband Internet Service Provider in Pakistan. However, we don’t intend to rest on our laurels, we are already looking at second generation devices, which will become commercially available shortly, and will deliver speeds up to an incredible 400Mbps.”

Mr Malik, however, auctioned against focusing solely on speed:

“While speed is exciting, most customers also require good data packages with ample Gigabytes (GBs) of data – something they cannot get from their existing providers, so as well as uniquely delivering 4.5G speeds, our LTE-A network will provide huge data capacity and that means heavyweight data packages for our customers.”

Mr. Malik said the Pakistan investment was crucial, for the future of Wi-tribe and importantly, to keep 1,000 or so jobs alive at the company:

“Our huge investment was essential in order to achieve our vision of bringing the very latest and best technology in the world to Pakistani households and future-proofing the company. In addition, we have brought millions of dollars of foreign direct investment into Pakistan, and importantly, this will be safeguarding over 1,000 jobs here at Wi-tribe insha’Allah, as well as some 4,000 jobs in our supply chain.”