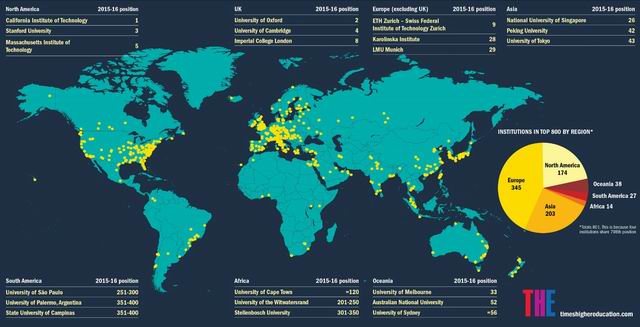 After that Times Higher Education World University Ranking for 2017 was published, Michelle Stack- an associate professor at the University of British Columbia and author of Global University Ranking and the Mediatization of Higher Education- wrote a compelling article about how the value education is the top priority rather than the rankings. He wrote that if you were to take certain steps you will be more likely to be placed higher on the charts.

Among his recommendations are getting a Nobel Prize laureate to give some of their time to students. Stack maintains that the rankings are about business, not education. Trying to climb higher in the ranks would cost money which means fee structures would inflate, the allocation of money will have to be reconsidered and the money which is supposed to be spent improving standards of education would be spent on a good PR.

He is not alone in holding this point of view. Many believe that the rankings don’t do a fair job at placing universities at their designated ranks. Furthermore, they find it ridiculous that enlightened minds would be affected by a mere report of a newspaper.

“(i)it’s one of the real black marks on the history of higher education that an entire industry that’s supposedly populated by the best minds in the country… is bamboozled by a third-rate news magazine,” said Leon Botstein, President of Bard College.

Right now there are no less than 20 such rankings that claim to be international. The Times Higher Education World University Ranking, QS, and ARWU are although, considering the big three.

There has been a certain shift in how these rankings are perceived over the past years. Despite people arguing that these rankings don’t have any actual implications for improving the value of education, they still seem to be turning heads all around the world.

Logically, the higher a university is placed the more chances it has of gathering an intellectual pool. High school graduates with better grades will choose a higher ranked university as first priority and as graduates, they become better alumni which ultimately maintains the university’s high ranking.

Some believe that the ranking system has seemed to have started a healthy competition among universities. This would prompt them to up their research and teaching departments and also upgrade their educational policies with effectiveness.

One of the factors that cannot be ignored is the effort, money and time that is being invested by these ranking on themselves. The World University Ranking has attached important events with its name. This year’s event, held from 3-5 September at King’s College London, featured some very influential people in higher education indeed. QS continues to build up a strong set of products and services in the international student market. Even the relatively conservative ARWU has expanded its range of activities. In their own ways, each organization is shoring up their expertise with their target audiences.

While these rankers claim to provide platforms for leading educationists to make progressive and future-based decisions, the influence f these ranking in directing the outcome of such platforms cannot be ignored. What goes on at the World Academic Summit – both on the stage and on the sidelines – as well as at other conferences like it, should be a matter of concern and interest for all those interested in higher education development.

ICICT 2019 to be held at the IBA Karachi