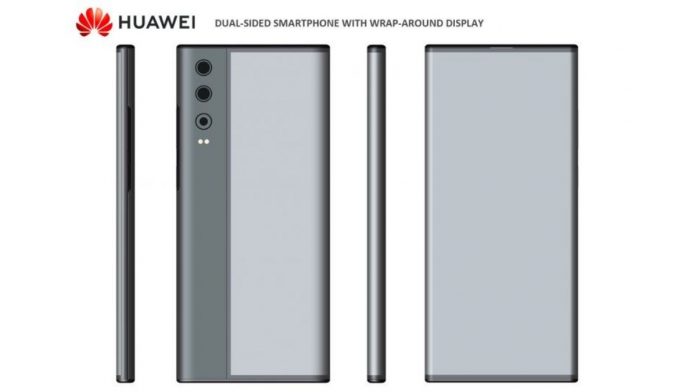 In accordance with patents filed in China, the very latest news surrounding Huawei goes on to suggest that the Chinese manufacturer might be working towards the idea of a phone that comes with a wrap around display.

After being spotted, it has in fact been claimed that the patents paint a picture of device that makes way of a device reminiscent of the foldable Huawei Mate XS when shuttered. A key difference of course here is the fact that this particular device won’t in fact fold rather it would actually resemble something akin to the Xiaomi Mi Mix Alpha.

Technical drawings on the other hand go on to indicate that the device will make way with an almost all-screen display upfront – barring a bezel that bookends the screen and goes on to extend along its right flank. The edge also goes on to house a power button as well as a volume rocker. The left side tapers with the screen around to the rear while the display only happens to be interrupted by a triple-camera array that goes on to mount on a vertical pillar. It also features with a speaker grille, SIM tray and also a USB-C port along its bottom edge.

Must Read : Samsung to acquire license to continue to work with Huawei

People still remain undivided though when taking into consideration the usefulness of a wrap around display – not just their practicality. While they will most likely attract the attention of many and will pose as a rather attractive looking device, they don’t really offer the versatility that foldable phones or indeed dual-screen devices give out. The Chinese company proceeded on to use the wrap-around display on the Mate XS to good effect for the sake of viewing selfies as well as other information snippets when idle – and so it might not be too stupid to come to the conclusion that this device too will employ something of similar sorts.

For now of course, much like the case is with many patents – they’re not a sure thing by any stretch of the imagination. And so only time can tell whether Huawei will come out with such a device but since it has already been done when taking into account the Xiaomi Mi Mix Alpha – don’t be too surprised if it happens!

Bad news for the next iPhone?