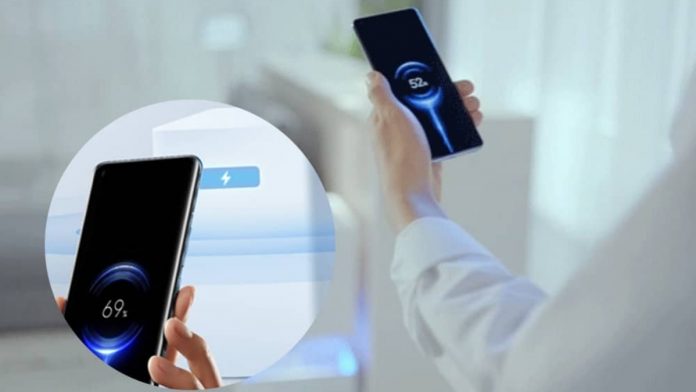 Xiaomi has just introduced a very innovative Mi Air Charge system which will give users the ease of wirelessly charging their devices from a pretty significant distance. As per the developers at the Chinese company, the new remote charging system is capable of charging multiple devices simultaneously and is even capable of recharging a Smartphone which is currently being used by a person who is walking around with it or if there is a small barrier in between the charger and the device.

The new wireless charging transmitter, is quite big in size, to give you a measure, it perhaps as big as a sofa side table, but its capability is unlike any other, which should redeem its overly large size. Thus far, the company says that the charger is only capable of providing 5W wireless charging and can charge multiple devices which fall in the radius of a few meters. Xiaomi says, “Xiaomi’s self-developed isolated charging pile has five phase interference antennas built-in, which can accurately detect the location of the smartphone. A phase control array composed of 14 antennas transmits millimeter-wide waves directly to the phone through beamforming.”

Must Read : Everything you need to know about the new Play Station 5

It is also worth noting here that, the Air Charge system is a little different than that of the Qi charging standard which we have usually seen in smartphones. As opposed to that, for this particular system, the Smartphones require to be equipped with a “miniaturized antenna array with a built-in ‘beacon antenna’ and ‘receiving antenna array’. The company noted that a compatible smartphone has a total of 14 antennas to convert a millimeter-wave signal which is emitted by the charging pile. The signal is then converted into electric energy through a rectifier circuit, which in turn provides the power necessary to charge the battery of the device, truly something remarkable in the world of technology.

Xiaomi is developing the new device such that, it is compatible with some if not all of their line of products, which include: smartwatches, fitness bands, and other wearables, to give users a complete experience. Gear up people, the time is upon us when our living room devices, including speakers, desk lamps, and other small smart home products, will all be built upon a wireless power supply design, not requiring any wires, giving us a truly wireless experience.

OPPO Exhibits its Vision for an Interconnected Life at MWC 2021...