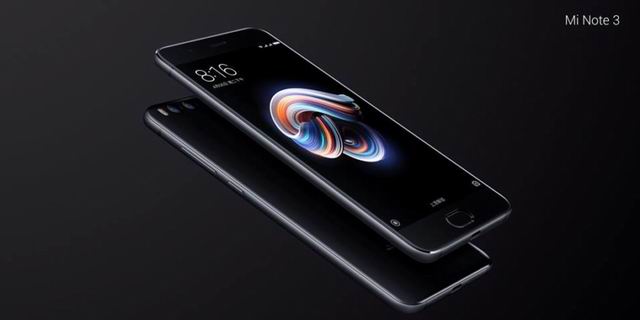 Xiaomi introduces the Xiaomi Mi Note 3 to the market today which is the successor of the Mi Mix 2.The device got hype due to its dual camera feature.

Here is the list of features that new fangled device got and is ready to hit the market.

Featuring a reading mode, the device contains a 5.5-inch display screen and is powered by the Snapdragon 660 chipset. By having 6 GB of RAM and it comes up with two options for storage either 64 or 128 GB.

Well, it’s not relatively as thick for its size as the Mi Mix 2 since it doesn’t mark the assumed bezel-less design, by manufacturing the device smaller than the iPhone 7 Plus, Xiaomi makes sure that the bezels are still quite thin.

One of the prime features of the Mi Note 3 is its dual-camera setup on the rear. It contains 12 MP wide-angle lenses next to a12 MP telephoto lens offering 2x optical zoom.

Xiaomi has also declared that the cameras have a 4-axis optical image stabilization which will let you capture those bokeh images that we all love. The company put emphasis on the fact that cameras are optimized for the low-light photograph.

On the other hand, the secondary camera holds a 16 MP sensor with a mode of “Adaptable AI Beautify”. Basically, this feature offers a “realistic beautify effect” that won’t negotiate the quality of the picture.

The Mi Note 3 holds aluminum frame which is slightly curved on the sides and a glass flip side with a mirror-like effect. If we talk about the design of Mi Note 3, it’s more like to the Mi 6 that was publicized back in April, which isn’t actually a bad thing.

With an influential battery having 3,500 mAh and stereo speakers it comes along with NFC, an IR blaster too. It has a fingerprint scanner that’s set in the home button below the display, a USB Type-C port, and for the purpose to unlock the device; it offers a facial recognition feature. Although it’s a nice feature to have, this technology hasn’t proved to be the safest one in the past.

If you want to buy the 64 GB version then it will set you back approximately $385, whereas the 128 GB variant will go for approximately $445 only the black model. To target the fancy customers there is a blue version of the device offered in the market that only comes with 128 GB storage and is to some extent more expensive at approximately $460.

Unfortunately, Xiaomi hasn’t shared any info regarding the release date of the Mi Note 3 yet. No need to worry though, as soon as we hear more on this topic, we’ll be sure to let you guys know.

That how to set up new AirPods