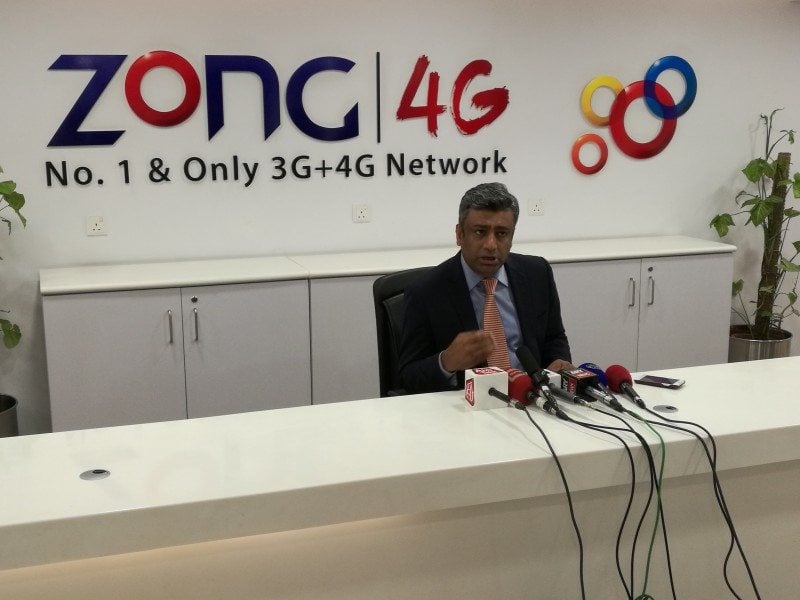 ISLAMABAD: Pakistan’s second largest cellular operator Zong has announced an investment of $ 300 million during the current year to expand its 3G network country wide while taking its 4G network to over sixty percent area of the country.

Addressing a news conference on Friday Zong’s Deputy Chief Executive Officer Niaz A Malik said that the company had invested close to $ 1 billion during the last year for network expansion. “We are already number two operator in the country and will invest further to expand 4G network”.

Malik said currently, more than 2,700 sites are powered with 4G services. As part of Zong’s future plan for 2016, these would be doubled in number. “We are focused on the delivery of 4G and we have made an immense investment on this front. Our 4G internet SIM is the fastest in terms of speed and high-powered features.”

“We have the highest number of 4G subscribers and the rapidly growing demand for 4G service has, at times, resulted in the shortage of our MBB devices. We are fully cognizant of the situation and are assuring their availability, accordingly,” he added.

Dismissing reports suggesting slow cellular signaling on part of Zong, he cited UK Open Signal Report that ranks Pakistan as 57th in Global LTE Coverage Comparison. “The report is based on Android users only who use Open Signal application. In Pakistan, this application is not very famous as most people use Ookla for this purpose and according to Ookla, we are way better than rest. Please be aware of the fact that we rolled out our 4G services just a year ago and any improvement on this front requires time. Pakistan does have better coverage of 58 percent compared to 49 percent of India, as reflected in the report.”

Referring to the much-hyped Pakistan Super League that took the country’s sports arena by storm, Niaz said Zong was the official PSL partner with the sole aim to promote cricket. “Pakistanis are a cricket loving nation. We at Zong strive to do our best to bring this great sport back to this great country that is yearning for cricket for the last many years. Our aim is to revive cricket here.”

Malik lamented over the fact that excessive taxes in telecom sector were not only adversely affecting the telecom industry but were eventually adding to the miseries of cellular subscribers. “Punjab has set a great example by abolishing 19.5 percent tax on mobile internet services. We hope that other provinces will follow the course. This is essential in order to allow the telecom industry to flourish. It would strengthen Pakistan economically”.

On Telecom Policy 2015, Malik commented, “The policy is silent on taxes and a greater role of the regulatory bodies will be required to address this issue with the government so the dream of digital Pakistan can be realized and our economy can flourish further.”

Niaz Malik spoke highly of Zong’s Customer Services Centre (CSC) recently inaugurated in Blue Area. “This is state-of-the-art CSC that is equipped with latest telecom services including the provision of advanced-featured handsets in addition to solving the problems of customers on the fast-track basis. We look forward to expanding such CSCs in different parts of Pakistan.