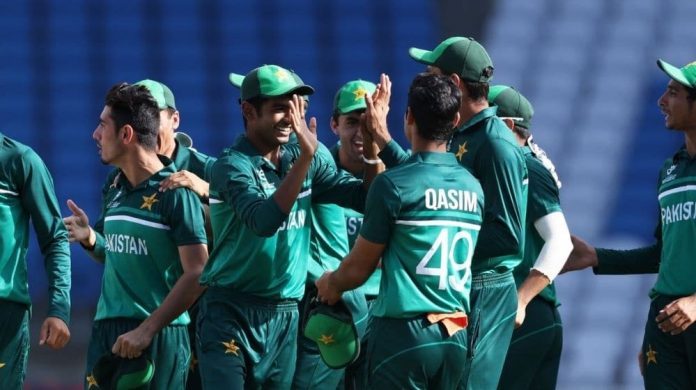 Both Pakistan and Sri Lanka had no chance of lifting the trophy last week after their chances ended at the quarterfinal stage. In the fifth-place playoff, Pakistan defeated Sri Lanka with ease.

With openers Muhammad Shehzad and Haseebullah Khan dominating the Sri Lanka attack from the start, Pakistan maintained its grip on the match at the Sir Vivian Richards Cricket Ground.

After leading Pakistan to 100 runs without loss, Shehzad eventually made 73 runs off just 69 deliveries before being dismissed by Raveen de Silva.

Qasim Akram, the skipper of Pakistan, also joined Khan at the crease. The pair stood tall against Sri Lanka, putting on a superb stand.

They both reached their centuries and took Pakistan beyond 350, but Khan was finally caught by Matheeesha Pathirana and the match ended on 136.

While Akram remained unbeaten, his side closed with 365-3, providing a formidable challenge for their opponents.

Within two overs, Akram smashed the Sri Lankan reply with the new ball, wrecking the innings.

Sri Lanka fell to 4-15 after Ranuda Somarathna also attempted a duck. Akram was the only one to succeed.

Afterward, Sri Lanka batted for pride rather than for runs.

Dunith Wellalage, the captain, didn’t give up without a fight and brought five boundaries in a brave 40.

Meanwhile, Vinuja Ranpul played a similarly defiant game, hitting 53 not out and his side’s only two sixes during the match.

However, Pakistan won by 238 runs after Treveen Mathew was hit on the pads by Zeeshan Zameer’s full delivery, finishing the Sri Lankans off within 35 overs to win the 5th place playoff match.