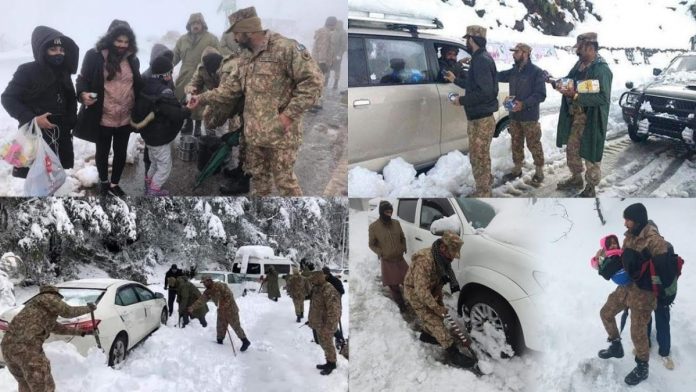 Every time a calamity or disaster strikes, whether it is a flood, heavy rains, a quake, a snowfall, or even managing traffic chaos throughout the country as a result of natural disasters, the Pakistan Army has always played a significant role in humanitarian operations and rapid response operations. As a nation, we salute the Pakistani Army under the command of its Chief of Army Staff, General Qamar Javed Bajwa.

Through the sacrifices, courage, and bravery of its soldiers and martyrs, Pakistan has been able to maintain its sovereignty, independence, peace, and stability today. Many people, including children, were rescued by military personnel and given medical care by a team of doctors. After more than 25 tourists were stranded due to heavy snowfall in Murree and lost their lives in their vehicles, Pakistani army personnel conducted search and rescue operations and evacuated hundreds of tourists.

According to the ISPR statement, more than 1,000 stranded people have been served food at Murrell Military College, Supply Depot, Army Public School, and Army Logistics School, Kuldana; additionally, shelter has been provided and food has been catered to the stranded people at Murrell Military College, Kashmiri Bazar, Lower Topa, and Kuldana, ISPR said.

A special thank you must go to General Qamar Javed Bajwa, the Chief of Army Staff, who recognized the efforts made by the formations involved in relief operations to meet the challenge and provide adequate relief to people affected by the snowstorm in Murree as well as heavy rains in Balochistan.

Pakistan Army has completed the search and rescue operation, and the regular order of living in the city has been restored. Tourists who were stuck in the snow were evacuated and moved to safer areas. This search-and-rescue mission was executed with the help of the Pakistan Army, Pakistan Air Force, Rescue 1122, Tourist Police, National Highway Authority as well as other authorities.

The removal of snow from main roads using heavy equipment provided through the Pakistan Army has also been completed, and the removal of snow is in progress. The entire country is in deep sorrow and grief about the Murree tragedy, in which around two dozen people died due to the severe cold brought on by continuous snowfalls and traffic jams. The snowfall news had brought thousands of tourists to Murree.

This is why a lot of them headed to the mountain resort without thinking about what the consequences could occur if they are caught in the dangerous situation resulting from the snowfall that was heavy. There was a report that said over 135,000 vehicles had walked into the hill station and the town’s parking capacity is to hold nearly 35,000 vehicles.

Murree received nearly 30 inches of continuous snowfall over the course of three days. The majority of tourists perished in their vehicles as they were stuck in traffic jams along the roads. Carbon monoxide is cited as the major cause of death.

Another reason for death was the recklessness of hotel managers who increased the rent for overnight stays to the range of to. 6000 to Rs. 70,000 for a single bedroom. The expensive prices per night in hotels forced guests to spend nights in cars.

Many tourists blamed the indifferent attitude of Murree hotel owners as the cause of the deaths of many people. Children cried in the frigid temperatures, seeking shelter but the greedy profiteers did not accept their victims’ plight as the tourists reported to Flare.

Certain tourists have stated that food prices also increased in the region specifically due to the extreme weather. Tea that cost around Rs60 was sold for Rs500 and boiling eggs were sold for as high an amount as Rs250, as tourists claimed.

Many travelers complained about the social networks that Murree guests and hoteliers have exacerbated the issue through pricing slashing, causing those who were stranded to stay overnight in the car, rather than spend the money to book a room. “Things would have been different if local people and hotels had been cooperative, but the reputation and conduct of the local people of Murree were also highly bad in this respect,” one top government official spoke to Flare under request for anonymity.

However, there are reports of God-fearing locals who offered their homes for tourists in need and provided blankets and food to the people who were caught out outside. It was the responsibility of the Price Control Committee as well as the Murree administration to regulate the cost of hotels and food items and to arrest those people who were involved in stealing and minting illicit cash and profiteers.

There was a lack of coordination between the departments since there were no prior meetings held to discuss the issue by NDMA together with district administrators of Rawalpindi, Islamabad,

Met Office had issued a warning that heavy snowfall could result in closures of roads for Murree, Galiyat, Nathiagali, Kaghan, Naran, and various other locations, but no preventive measures were taken. A number of countries, including Russia, Sweden, France, Germany, Italy, Spain, Japan, and the United States received almost eight to 10 months of snow however, people living in these countries live normal lives as their governments have created infrastructure to meet any weather condition and eventualities.

Regarding the Murree incident, when it was reported that the Met Office had warned of an intense snowstorm, why did the local authorities and police fail to reclaim tourists and stop the entry of vehicles in the town? The citizens of the United States were ecstatic after hearing about the snowfall in Murree without considering the outcomes and what recourses are in place in the event that they get stuck by the snow.

This is another aspect of the incident to prove everyone is at fault for the disaster. However, the main responsibility for implementing preventive measures fell upon the police and the administration that they did not take into consideration. In the wake of the tragic deaths of innocent people trapped by the snow of Murree anger is being shared on social media site Twitter as well as the administration is criticized.

On Twitter where people are accusing the government of incompetence, many are insisting that it’s not appropriate to blame the citizens in this instance. Premier Imran Khan in his tweet expressed his sorrow for the incident, but also blamed the tourists and acknowledged that the administration wasn’t prepared to react in this kind of situation. He said that at the event “a large number of people came without considering the unusual snow and weather conditions”.

In his tour of the region, The Punjab Chief Minister voiced his displeasure at the overcrowding that has occurred in Murree, i.e. the entrance of more vehicles in the area than their capacity. He stated that he will take action against those responsible for the carelessness following the investigation report.

Usman Buzdar also approved the creation 2 police station as well as two new parking plazas. one in Sunny Bank and the other located at JhingaGali. “In the future, crowds of tourists and vehicles Murree will be monitored and only a certain number of vehicles and individuals are permitted to enter the area.

The government also has given its approval to the construction of linking roads leading that connect to Murree,” he said and added that these link roads will be extremely helpful to visitors to exit and enter Murree. He also pledged the prosecution of hotel owners who were discovered to be charging too much for tourists. A preliminary report from the inquiry committee investigating Murree’s tragic events Murree tragedy has identified the presence of carbon monoxide (CO) to be the main cause of death.

The report was sent to Chief Secretary Punjab Usman Buzdar, it was discovered. The report also highlighted the absence of administrative equipment to assist tourists and be up to the task. For instance, as the report pointed out there was a slick road patch in front of the cafe in Murree however, the authorities didn’t do anything to correct the problem. This patch was part of the road that connects Murree to Rawalpindi as the report indicated. It was

Faisalabad businessman is arrested for ‘abduction, torture , and sexual assault’...