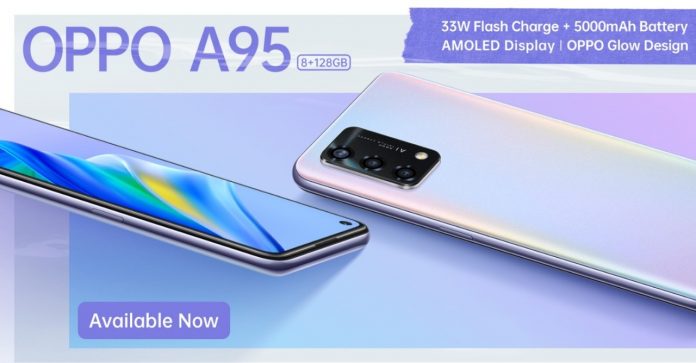 Amongst the latest batch of phones that have been launched by Chinese tech giant Oppo, the A95 certainly is one of the more highlighted devices to make its way right into the fold. Much has been made of the device as well as Oppo, as the company continues to deliver on really decent devices in even more impressive price points, and continues to improve its market share as it looks to square up against the giants of the smartphone industry.

The latest device from Oppo has been in the news recently due to the fact that it is without doubt a phone which has been received in quite a good and positive manner from the market enthusiasts. But what makes the device so good, and is it the best phone in this price segment? Here, we shall have a look at all the things that make the Oppo A95 special and all the reasons why you too should look towards the prospect of investing in this device if you’re looking to purchase a new device.

The design of Oppo A95

The design of this device is indeed a rather simple one to be honest. For the most part, it even resembles the Oppo Reno 6Z, another device which was very popular – as it also has the very same matte finish along with the sparkly glitter look to accompany. However, while we continue to make comparisons between the two devices, it’s also important to remember the fact that the A95 isn’t at all as rough as the Reno 6 though.

The display Oppo A95

The phone has a huge 6.43-inch AMOLED display integrated within and makes its way with the more typical resolution of 2400×1080, along with a 60Hz refresh rate. All of this of course is very standard and isn’t anything special, but as you would imagine, one couldn’t really argue for more at this particular price point.

The phone also features with an In-display fingerprint scanner and this scanner in particular has been on the receiving end of a fair amount of criticism as many continue to criticize its speed – or lack of. Many have been left pondering over the possible alternative of a physical fingerprint scanner perhaps placed at the back of the phone and how much better that might have been in comparison to this rather slow scanner.

The cameras of Oppo A95

The cameras don’t exactly credit the A95 all too well to be honest. While we have a total of three cameras present at the back, only one can really be tasked as usable. While the depth sensor is useless, the 2MP macro camera isn’t really capable of taking rather decent pictures in any case.

The performance of Oppo A95

As far as the performance of this latest offering from Oppo is concerned, it comes as a surprise that the phone is still making use of the Snapdragon 662 chipset in the year 2021 – due in course of the fact that this particular chipset is nearly two years old at this point. Nonetheless, even though the chipset might be rather old, it’s still more than useful as far as day-to-day functions are concerned, however, you might feel a bit of sluggishness in the performance when playing really heavy games though.

In the battery side of things, the device from Oppo actually does rather well – something you would of course expect from a device that sports a 5000mAh battery. However, due in course to the fact that the device has the Snapdragon 662 integrated within, the battery could’ve done even better had there been a more advanced and more recent chipset included within.

And as far as the charging is concerned, the 33W propriety charger takes about 70 minutes to charge to a full 100% if the device is at 15% at the time it is put to charge. This is what you would indeed expect from a device that carries a massive 5000mAh battery and is decent charging time to say the very least.

The A95 still happens to run on the ColorOS 11 version 11.1 and that version of the ColorOS is pretty decent to use all in all, giving a rather satisfactory software experience. The software is very clean and all of it is made better by the fact that there happens to be no bloatware. And come to think of it, one would also have to imagine that the A95 will also be on the receiving end of the ColorOS 12 update, so an even better software experience is promised, however, you’ll probably have to wait a bit longer than expected if you are an A95 user.

Other areas to consider

You can also take in a large amount of joy coming in the form of the fact that the A95 does indeed feature with the 3.5mm headphone jack. The removal of the headphone jack in the more premium phones has left many potential buyers in the dark, so the fact that the A95 will end up making way with this particular feature will also definitely present itself as a major plus point.

Also, it’s definitely worth mentioning at this point then that the A95 also makes way with the aid of a triple card slot, so if you are the sort of user who likes to have multiple numbers at their disposal, then this too is a major plus point to have.

All in all, the A95 falls in the mid-ranger segment of the smartphone market, meaning that the device can indeed present itself as a very decent option in this price segment. The fact that the phone makes way with the headphone jack, a decent smartphone experience and also coupled with the fact that there is a massive battery at hand too along with all of the other requirements and features that you would expect from a smartphone in this day and age means that the A95 is a very decent option to consider – especially if you’re not looking to break the bank just for the sake of owning a decent enough smartphone.