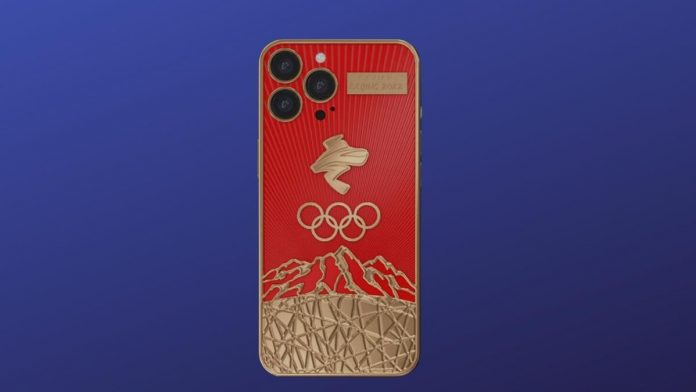 Winter Olympics have of course started in China and did so starting the fourth of this month. In order then to commemorate the Winter Olympic games, luxury iPhone casings make in Caviar has gone on to create two special edition iPhones that happen to be covered in gold.

The Beijing Winter Olympics iPhone are modified iPhone 13 Pro as well as iPhone 13 Pro Max. Caviar has indeed made the back casing of the phone impact resistant, which turn gives the illusion of rays of sun.

The back of the phone makes way with the Beijing Winter Olympics logo along with the National Alpine Ski center and the delicate pattern of its skating tracks. The most impressive thing about these iPhone 13 Pro as well as Pro Max phones revolves around the fact that all the designs as well as the caviar branding as well as the edges and the camera rings, all happen to be made with the aid of 18-carat gold. Due to the fact that its actually limited edition, there are only eight such devices which are available to be purchased.

Also Read: iPhone 15 Pro displays to be supplied by BOE next year

Other than the attraction of exclusivity, there is another reason as to why caviar only made eight of these devices and that happens to be their price tag. The iPhone 13Pro Olympic Hero gold makes way with a price tag or $26,000 for the 128GB model. On the other side of the picture then, the luxury case maker has priced the iPhone 13 Pro Max Olympic Hero Gold 1TB model at $27,080.

In the past, caviar has indeed made some rather costly, and yet intriguing cases, such as the case that could actually stop a bullet – the one it made for the iPhone 13 Pro. All in all, the brand continues to hold its name in the casing department then as the leader then.

An Exquisite Design of NOTE 10 Pro Winning Hearts of Millions...

The Vivo Y12 packs a number of high-end Mobile features