So one company which is slowly rising up the ranks is Vivo. The Chinese manufacturers have been giving users some amazingly engineered and innovative smartphones which have really made an impact in the smartphone industry. One of there latest creations, the Vivo V15 has also made its way in to the cellphone industry and is, in turn, a phone which has received a lot of praise in recent times, mainly because of the mid-range price the phone has and the amount of tantalizing features users get access to at that  price. Moreover, let us get into some depth of the said smartphone.

The Vivo V15 comes with a sleek design, which is somewhat complicated but still looks cool nonetheless, the design is however quite like that of the V15 Pro. In addition, we did not see many changes, except for the presence of the physical fingerprint scanner which is found at the back of the phone and on the back we see a simpler finish, the phone does have a slightly bigger size than that of the Vivo V15 Pro. 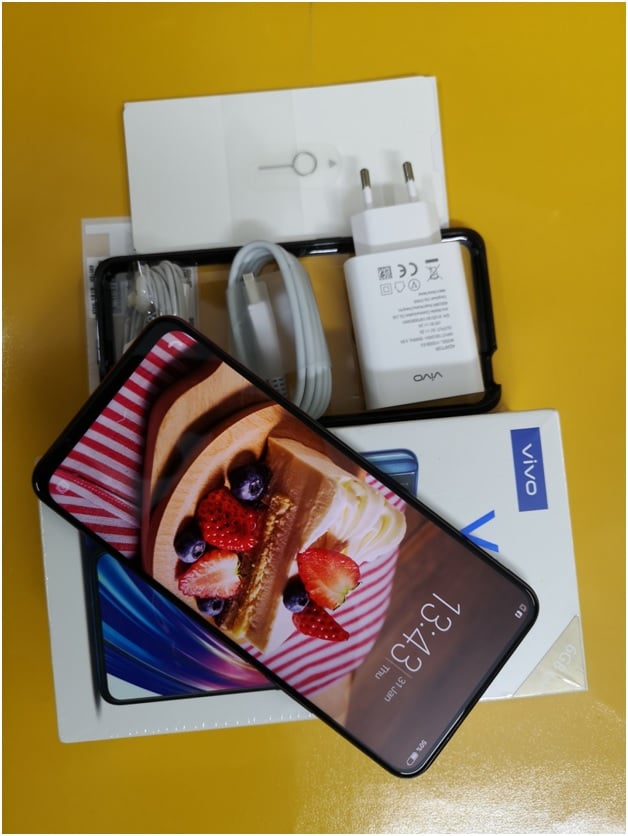 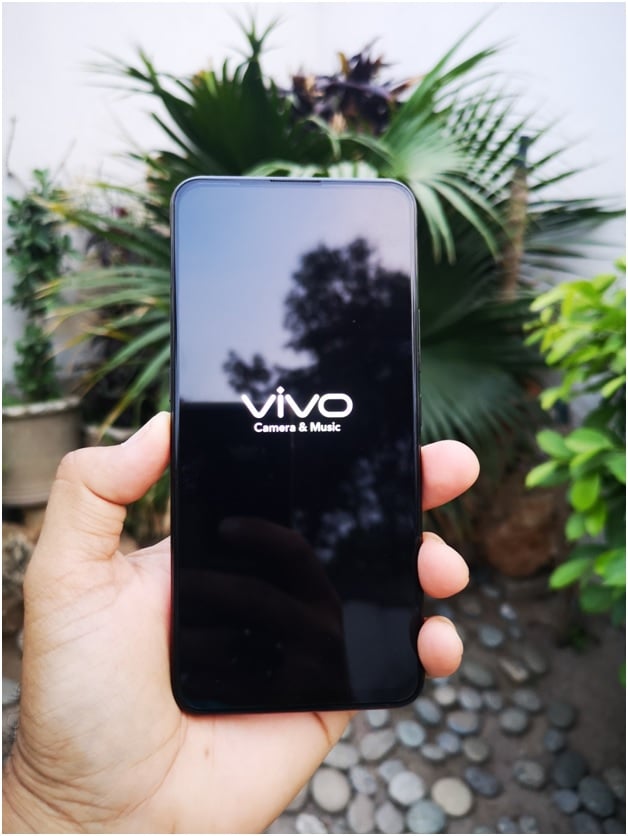 Now when we got hold of we got to know a little about how it felt while using the device to carry out some functions, in addition, the larger size of the phone gave us a sturdy feeling with no flexibility at all. It still felt pretty good in the hand even though the phone seemed a bit heavier than other devices in the market. However, the large size of the new devices will likely be a problem for users who have relatively smaller hands,  as it is quite difficult to use the phone with only one hand. You will need both hands when using the device. The included smartphone case is a pretty decent touch considering the fact that the case is designed for giving the notch of the device a little more protection. 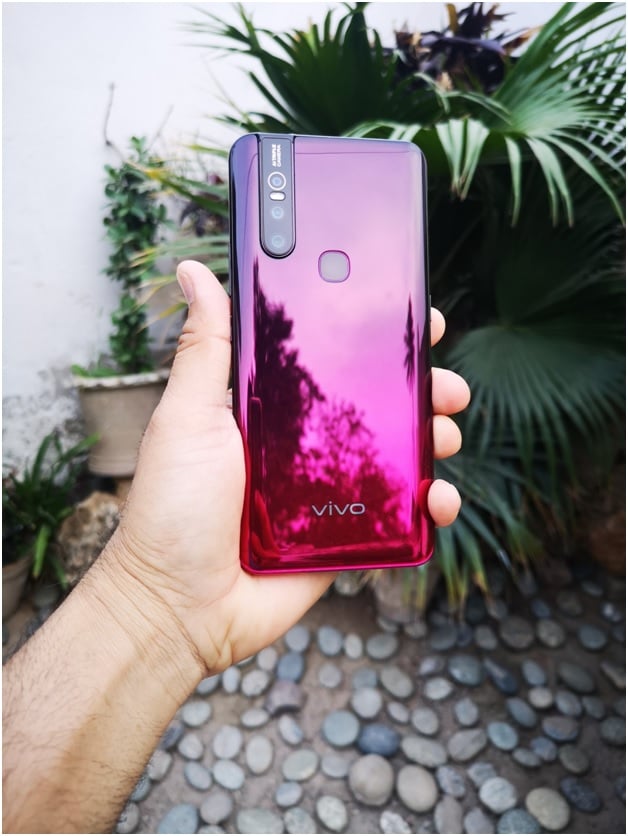 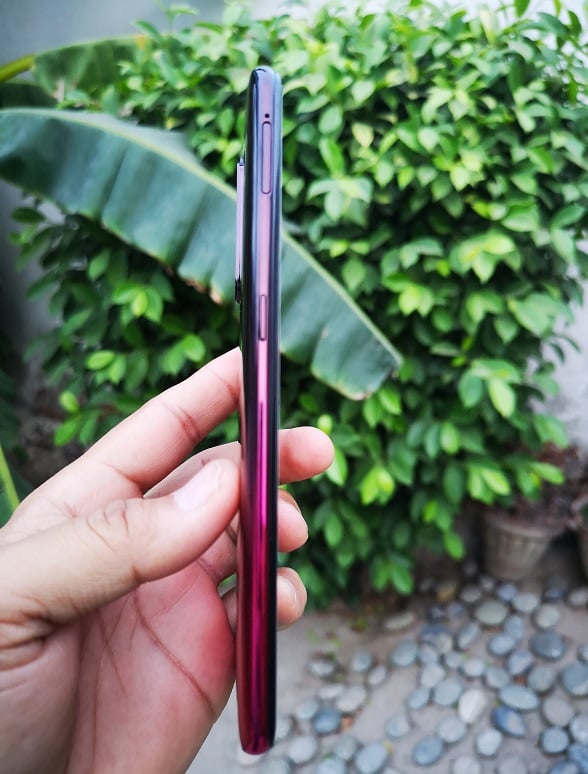 Moving on to the hardware capabilities of the new device, in terms of the performance of the device, The V15 quite easily-handled all the day-to-day tasks one would incur on a phone without any issue. In addition, the device was able to handle our daily medium to heavy usage tasks which include multitasking and working on 7-8 apps, light gaming, music streaming, and video streaming without any issue. It did not, however, give us a good experience in terms of gaming, the Helio P70 SoCdid not come up to standard in terms of heavy gaming such as PUBG Mobile and we saw that the phone felt some pressure when we turned on the game, what we mean by this is  that the device was not able to give us a peak performance, when it came to graphics. 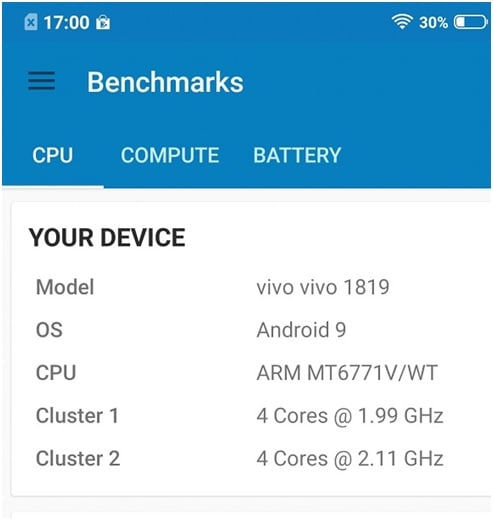 While launching PUBG Mobile for the first time, the device set the graphics level for the game at medium but its lagging was clearly visible medium graphics setup. When we did drip down to Smooth, it did somewhat improve the performance of the game, but still not a worthwhile experience. Furthermore, the device also heats up during long gaming sessions but managed to maintain the level of performance that it offers which is decent enough.

Moving on, in terms of the Operating Software the phone has been loaded with FunTouchOS 9 which comes with some pretty cool features. We did not, however, like the influence that the company gets from Apple iOS in terms of User Interface elements and the overall design of the OS. We would really appreciate it if the company would opt for a more uniform Android-like interface which will also make it easier both for the user as well as the company. Out of the box, the device came with Android 9 Pie with January 2019 Android Security patch. In addition, the device does pack some pretty good and important features such as Game Cube, Do not disturb mode, Motorbike Mode, AI-powered assistive features with the integration of Jovi in camera and the button. It also comes with iOS-like Easy Touch which makes navigation in the UI slightly easier. Moreover, the OS does not have the inclusion of an app drawer, in that regard users will have to swipe across the home screens, in turn, see and access all of the reapplications. Furthermore, a swipe to the right on the first home screen of the device will give users access to the Smart Launcher, here you can find dedicated task cards which shows you the weather, a to-do list, app shortcuts, and news headlines. 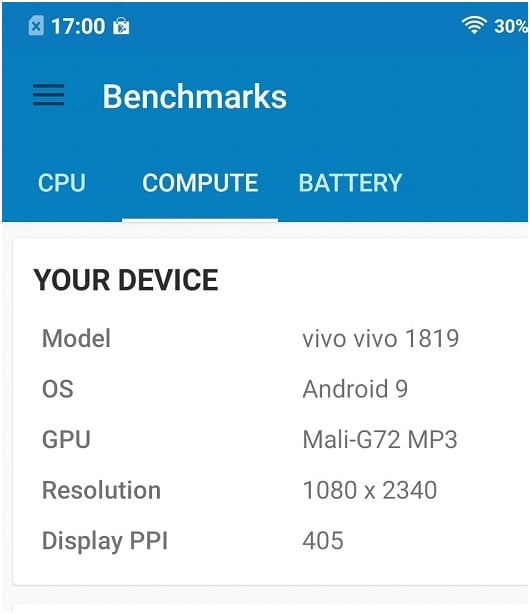 There’s a universal search bar that can be used to find an app, jump to a system setting, or perform a quick Web search, all of which are notable additions in the FunTouch OS 9.0.

In addition to that the new Operating Software will also give users a feature which the company calls the Game Cube and according to the folks at Vivo, this will, in turn, enhance the in-game experience that users crave, however, on switching the feature on we did not see any noticeable gameplay improvements which is major let down from Vivo’s side. There is also another gaming oriented feature called the Game Assistant, which in turn claims that this feature improves the efficiency of the CPU and RAM to give users a much better experience, and also provides users with quick access buttons for blocking notifications and controlling call behaviour

In terms of the camera, the Vivo V15 does a pretty good job under most conditions. The phone comes with a triple-camera setup at the back of the device with the primary camera sensor coming along with 24-megapixel resolution and an f/1.8 aperture, a secondary 8-megapixel camera with an ultra-wide lens, and a third 5-megapixel sensor which is used for depth mapping. The front camera comes with a motorized pop-up camera with a  32-megapixel sensor coupled along with an f/2.0 aperture. Moving on, in terms of the performance the primary 24-megapixel camera does a pretty good job in capturing images with detail. Though the camera needs to improve its performance in capturing the colors in some conditions, for example, the device may look washed out in harsh lighting conditions. The auto HDR feature also results in occasional halo-like effect around objects but all of that can be improved by a simple software update which will certainly make things better for the company as well as the final consumer of the device. The wide angle lens is impressive and does not result in as much destruction towards the edges as we saw in the V15 Pro. Moving to low-lighting conditions, we feel that the company will need to improve as many shots were filled with some interference and the over-all image looked a little messy and in turn, the final picture lacked clear details. All in all, in terms of the back camera setup, this was probably a let down from the company as with a triple camera setup we expected better quality. The camera did a fair job which we believe could have been made better by the company. 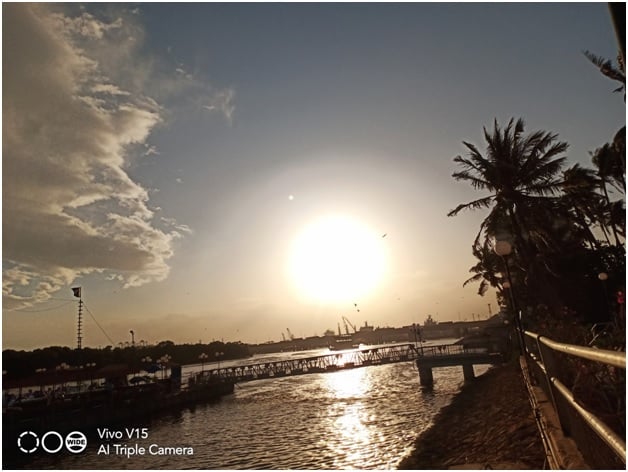 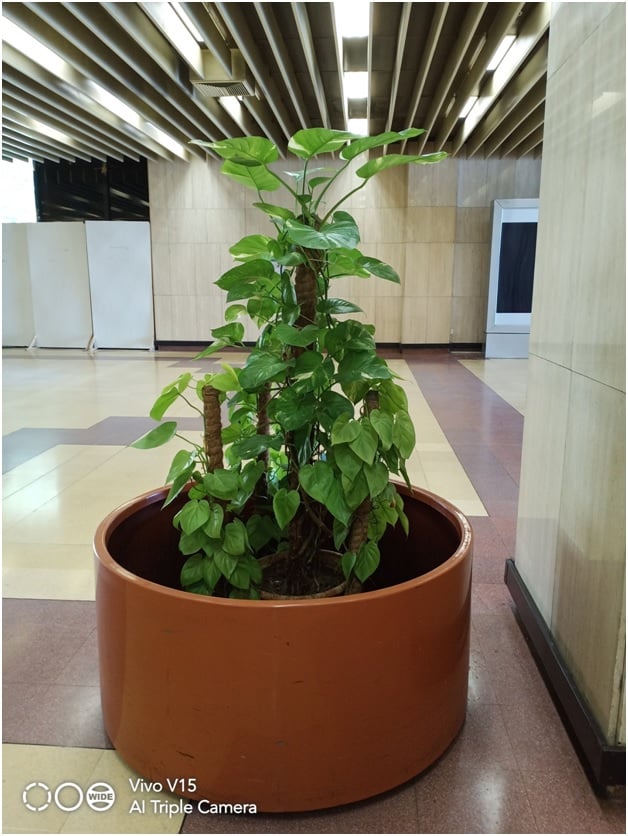 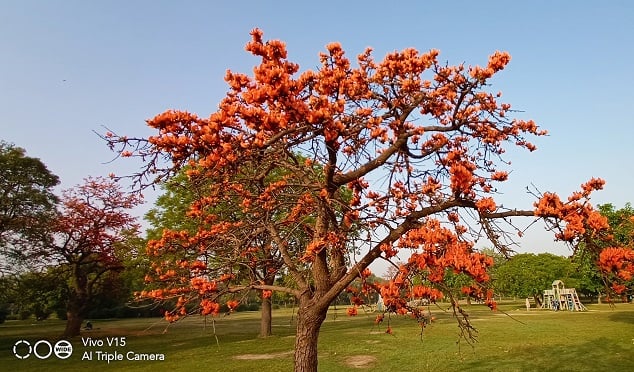 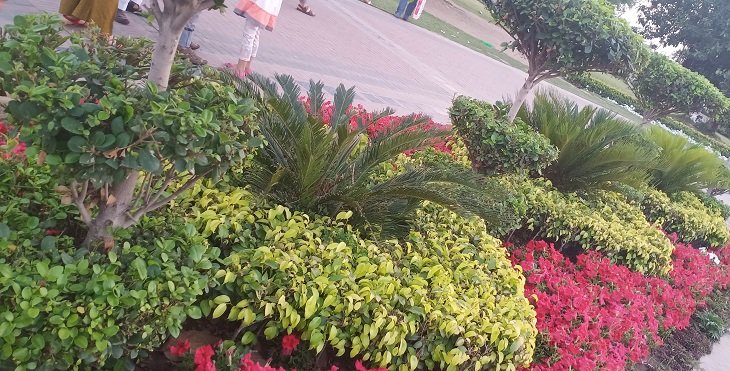 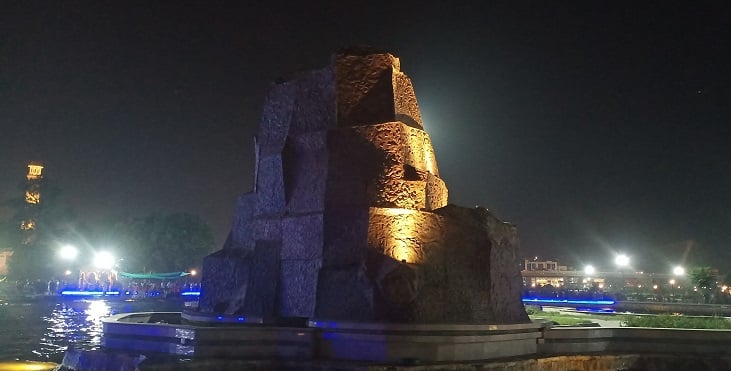 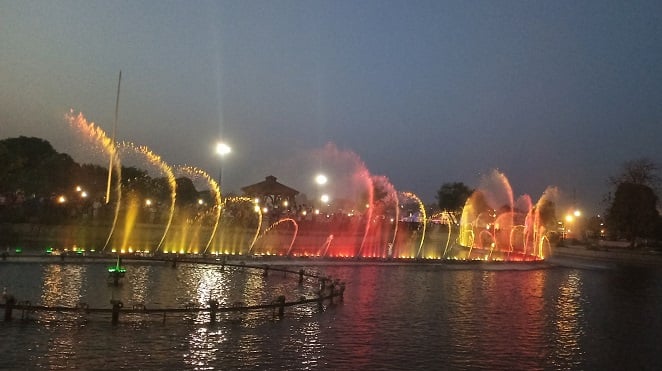 Finally, the selfie snapper is in our minds, currently one of the best selfie cameras out in the market, The 32-megapixel camera sensor does an amazing job in capturing good clear images. All this is enhanced by a number of software features including auto HDR, studio lighting effect, live photo, AR stickers, “AI Beauty” mode, “Pano” mode, “Pro” mode, and “Doc” mode for document scanning. Doc and Pro mode, however, is only available to be used by the rear camera. This camera, in turn, helps in redeeming the points lost by the primary cameras at the back.

Must Read: 8GB RAM version of the Vivo V15 Pro with a new color?

The pictures captured by the front camera had an astonishing amount of detail which gave users good color reproduction and sharpness. In addition to that, the Edge detection was also quite accurate, and the studio lighting effects helped in making the shots social-media-ready by giving users the access to lots of filters and colorful effects to decide from, hence giving users the perfect picture for Social networking. The AI Beauty mode offers a tone of beautification options such as skin smoothening, skin lightening, jawline slimming, and eye enlargement. In addition to that, there are also full-body beautification tools which have functions such as reducing waistlines and making legs look thinner and longer, which in itself is an innovative feature. 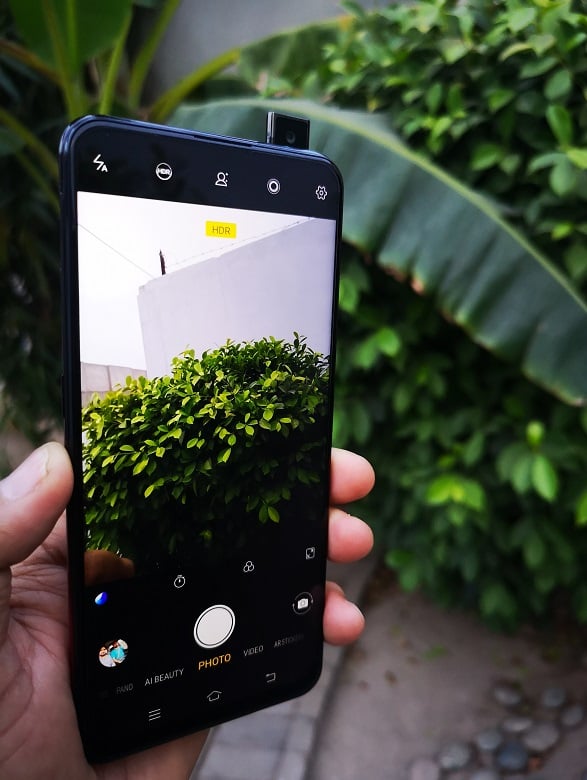 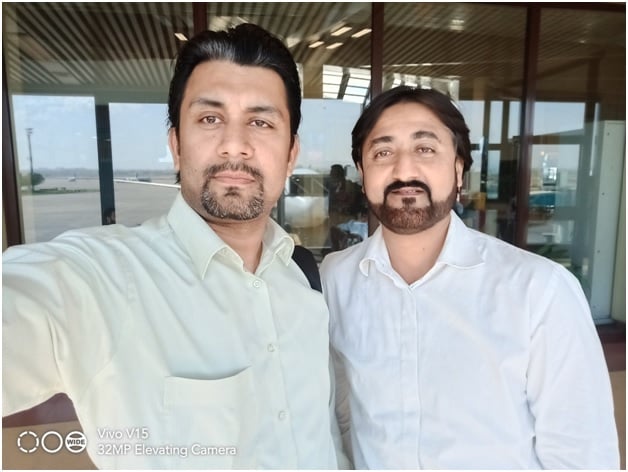 In this department, we think the company have done a pretty good job, they have provided users with a large 4,000mAh battery, which gives users ample amount of time for the running of operations on the device. The device can easily last about a day as it was able to withstand the heavy usage we put it through for about 10 hours. In this 10-hour time span we carried out multiple heavy tasks such as gaming, running of multiple applications and some photography and all in all the device gave us a good time. 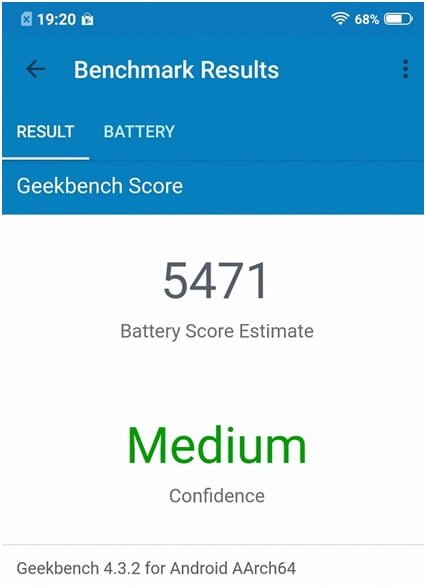 All in all, we consider the device to be a good option for the users in the market considering the amount of competition out there, this phone does a pretty good job against them at the mid-range market of mobile phones. However, with a price tag of PKR 50,000 in Pakistan, we believe users have the option to opt for a better phone in that price range. A suitable competitor in that regard would be the Samsung Galaxy A50 which includes a beautiful design, a beautiful Super AMOLED display, triple rear cameras, and an in-display fingerprint sensor giving it an edge over the V15. In contrast, OPPO is also another brand who have released some amazing phones at a reasonable price, one such phone is the Then there is the OPPO F11 Pro which offers pretty similar specifications such as the inclusion of a pop-up front camera, but better camera performance, for a slightly higher asking price. Finally, we would like to conclude that although, the Vivo V15 has a few things going on for it and though it might possess some pretty cool features but, when up against numerous competitors the device falls short in competition. Even if you really like the idea of a pop-up camera, you can get much better hardware and overall performance elsewhere.

Samsung Galaxy A10 to launch next week in Pakistan