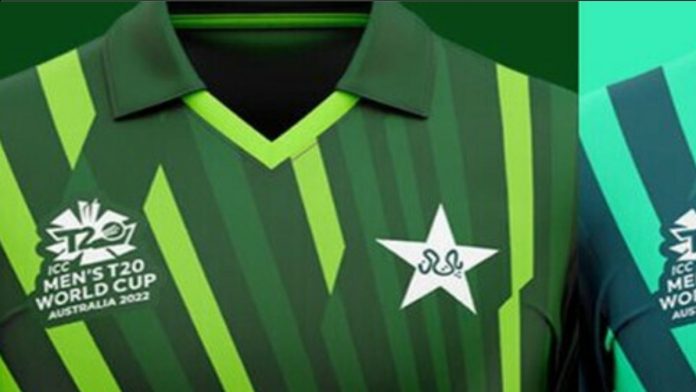 The preparations in 2022’s T20 World Cup kit are already underway , with the big event only a few months away. The participating teams have already revealed their squads for the tournament, and the majority of teams are currently preparing their gear for the tournament.

In the same way, Pakistan has also teased the debut of their brand new T20 kit that will be the one that the Babar Azam-led side will sport for the big event. With the official launch of the new kit just close to the mark there were a few photos surfaced on social media showing Babar wearing the new jersey.

The style of the new kit is an inspiration from thunder, which can be seen by light green lines running across the body. The base of the shirt is dark green with various shades of green running through the shirt.

Check out the design that was leaked

Although the leaks aren’t yet official, it is believed to be the case that Pakistan cricket team could be wearing the jersey at the huge occasion.

Additionally, Pakistan Cricket Board (PCB) used social media to announce the official kit unveiling ceremony for 2022’s T20 World Cup will be on the 19th of September, which is the Monday. They posted a teaser video of the kit , captioned “Thunder Awaits”..

How Pakistan women footballers are making every opportunity count

From The Pitch To Igniting The Battlefield; Cricket Legends Team Up...