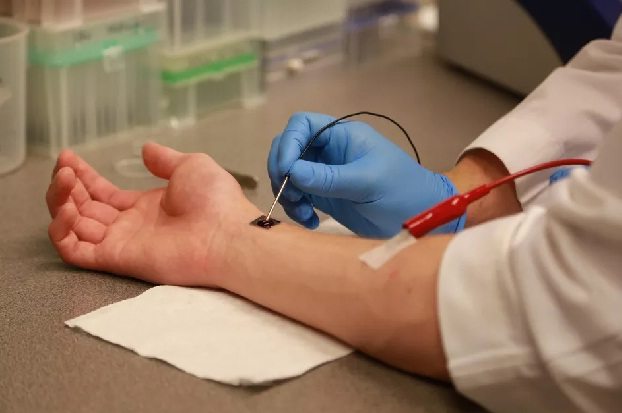 A simple zap from a tiny chip is enough to reprogram skin cells to perform other valuable functions, such as carrying blood or even helping you to think.

Researchers talk about a process known as tissue nanotransfection (TNT). When the healing is concerned this TNT works like a bomb.

Usually, It’s a bad thing to have something growing on your skin, but latest technology uses that all important layer as a garden to “grow” whatever types of cells your body might require  to treat an injury or disease, be it in a limb or the brain.

Researchers at the Ohio State University Wexner Medical Center have introduced a nanochip that uses a bit of electrical current to deliver new DNA or RNA into living skin cells, “reprogramming” them and giving these cells a new function.

Chandan Sen, director of the Center for Regenerative Medicine and Cell-Based Therapies said in a statement at Ohio State,

“It takes just a fraction of a second. You simply touch the chip to the wounded area, then remove it,”

“At that point, the cell reprogramming begins.”

In a study, that was published in the journal Nature Nanotechnology, Sen’s team utilised a technology called Tissue Nanotransfection (TNT) to create new blood vessels in mice and pigs with severely injured limbs that lacked blood flow.

The researchers zapped the animals’ skin with the device. And within about a week, active blood vessels were seen, essentially saving the animals’ legs.

The tech was also used to produce nerve cells from skin that were later harvested and injected into mice having brain injuries to help them recover.

“By using our novel nanochip technology, injured or compromised organs can be replaced,”

“We have shown that skin is a fertile land where we can grow the elements of any organ that is declining.”

While it seems to be futuristic, reprogramming skin cells is not a newer idea. The ability to diversify skin into pluripotent stem cells, sometimes called “master” cells, awarded a few scientists a Nobel Prize about 5 years ago.

But the new nanochip approach improves  that discovery by skipping the conversion from skin to stem cell. Instead converting a skin cell into a type of cell is desired in a single step only.

“Our technology keeps the cells in the body under immune surveillance, so immune suppression is not necessary,”

From now  on I think we have all learned that beauty is only skin deep, but it might take a some time to learn that the skin could go for cures, at least if the system been discussed works just as well on people.

In the future, the scientists expect to find out by continuing to test this technology in human trials. It is aimed that it could eventually be used to treat all kinds of organ and tissue failure, including diseases like Parkinson’s and Alzheimer

NASA to use mixed reality to train Astronauts for Space Station